Ray Lovelock (19 June 1950 – 10 November 2017) was an Italian actor and musician, best known for his roles in Italian genre cinema. He played Renzo in Mia and Me Season 2.

Ray Lovelock was born in Rome on 19 June 1950. His mother was Italian and his father was English. They met during the Allied occupation of Italy in World War II. While at college, he supplemented his income as an extra in movies and TV commercials.

Lovelock also performed in a rock band with longtime friend and actor Tomas Milian, where he was discovered by a talent agent. In Italy, he released 5 singles, which included the main theme song of Live Like a Cop, Die Like a Man. He also released 2 singles in Japan.

Lovelock played his first credited movie part in the Spaghetti western Se sei vivo spara (1967), directed by Giulio Questi and starring Milian. He has since established himself as a reliable character actor in Italian films and television, working steadily from the late 1960s. 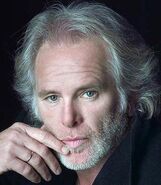 Add a photo to this gallery
Retrieved from "https://miaandme.fandom.com/wiki/Ray_Lovelock?oldid=13971"
Community content is available under CC-BY-SA unless otherwise noted.